After a few days of  November rain that had started to fill the recently dug pond, the sun came out for a Blyth Woods work party to plant more trees at Grove Piece. A red admiral was spotted soaking up the sunshine.

A selection of natives including crab apple, alder, spindle and small leaf lime were lined up to replace some trees that hadn’t made it through the scorching summer weather.  We soon discovered that quite a few that had been marked as dead had come back to life – they had shut down during the drought.  To allow the young trees, planted over the last two years, to develop strongly and well shaped, tree guards were removed from the robust and bushy ones. 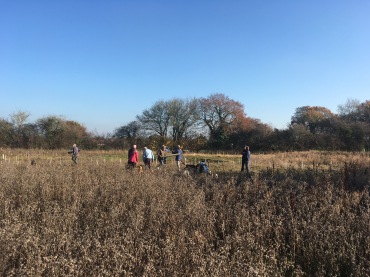 It was time to check and clean out the nest boxes and we were excited to see that most of them had been used.  One box had been filled with dry grass and an acorn so other wildlife had been making use of them.
Part of Grove Piece is managed by children from Wenhaston Primary School who were planning a planting day later in the week so the area  was cleared of prickly weeds then canes were put in place to show where they could plant the trees they had grown in the school nursery.
After a couple of hours hard work, we gathered for a well deserved cup of tea and biscuits. 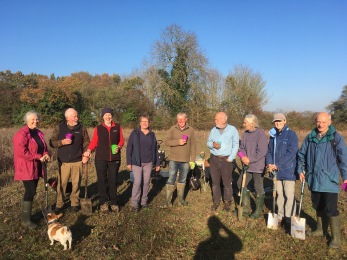 Everyone is welcome to join Blyth Woods at work parties through the year so keep a look out for dates.

Dates for your diary :